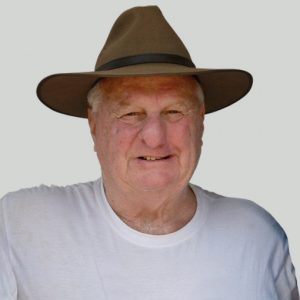 Born in London during the Blitz, Andy spent the first five years without his father, who was fighting in India. In 1948, at the age of seven he moved to Lusaka, Zambia with his father William, an out-of work architect and mother Edith by his side. Like fellow countryman David Livingstone who was also of Scottish heritage, Andrew was about to form a bond with a country and continent that would never be broken.

After qualifying in Cape Town, Andy was determined to follow his father into architecture. Anderson & Anderson became a hugely dynamic practice and today you see his architectural influence all over Zambia. Their success extended to Lilongwe, Bulawayo, Francistown, Harare and Gaborone.

Andy was truly inspired by Zambia’s people and its natural beauty. He joined many organisations and societies and it was at the Round Table that he became close friends with Klaus Rygaard.

In 2007 Andy was visiting Klaus in Copenhagen at the same time as Steffan’s visit. Steffan was keen to pitch Zambia to ProjectsNow as it was in its infancy at that time. Andy mentioned the Kariba Dam’s effects on the local community, displacement and in particular Bbkasa & Namoomba. The Danish Embassy with Klaus’ connections had commissioned a classroom, however much more was needed. And so ProjectsNow took up the baton and continued with further classroom development, which naturally led from the school to the local village.

Building classrooms, a library, teachers’ houses and nurses’ homes to mention a mere few accomplishments would never have materialised without the knowledge and influence of Andy. ProjectsNow owes a deep gratitude to Andy and his expertise and efficiency at ensuring all projects were completed on time and on budget.

Andy’s home in Lusaka, Buckridge, was the most welcoming retreat. No guest could leave without at least sampling the hospitality and generosity served at his bar.
At the memorial service in Lusaka held on 21/10/2021 testament to his character and influence the tent was full and in particular a large delegation from Namoomba came to pay their respects.

Andy was a committed board member of ProjectsNow and will be truly missed by all members, NGOs and visiting donors.